PROPOSED NEW CITIZENSHIP CODE TO BE VOTED ON BY WWFN MEMBERS

History before the “Story”

The Wolastoqey people have occupied their ancestral territory for more than 8000 years. Before the arrival of Europeans in America in the 16th century, the Wolastoqiyik’s life was punctuated by the cycle of the seasons. Indeed, this indigenous peoples of the great Algonquian linguistic family practised a semi-nomadic lifestyle. The people of this nation moved over great distances throughout their territory, the Wolastokuk, whose main artery is the Wolastoq River (Saint John River) and which extends from the St. Lawrence River in the north to the Bay of Fundy in the south and from east to west from the Matane area to the Etchemin River, near Quebec City. By means of waterways and portages, the Wolastoqiyik (people of the beautiful and bountiful river) travelled these impressive distances demonstrating an unequalled knowledge of their territory and its resources.

During the French regime, the Wolastoqiyik were known as “Etchemins” in reference to the Etchemins River, whose river mouth is near Lévis, which they used to travel to the Atlantic. Later, the English began to use the term Malicite which means, in Mi’kmaq language, those who speak slowly. This ethnonym was transformed over time and became “Maliseet” in English and “Malécite or Amalécite” in French.

In the early 19th century, the number of Euro-Canadians in the territory was increasing and the space available to establish agricultural villages was becoming increasingly scarce along the St. Lawrence Valley. It was also at this time that relations between the indigenous people and the colonial authorities began to deteriorate. Thus, the people of the First Nations, who for decades had been military allies, suddenly became obstacles to the colonization and development of the country.

The Wolastoqiyik were among the first to be placed in “Indian settlements” which later officially became “reserves”. It was in this context that the “Isle Verte Indian Settlement” was officially created in 1827 at the request of Chiefs Louis and Joseph Thomas acting on behalf of some thirty families. It was not until 1849 that the term “Viger” appeared when the township of the same name was created, in homage to Denis-Benjamin Viger, a notable from the Montreal area. There is no known link between this person and the people of the Wahsipekuk community.

In 1851, following the adoption of a law aimed at creating several reserves, the settlement of the “Amalécites of Isle Verte” officially became the “Viger Reserve.”

For some sixty years, the Viger reserve was occupied by the ancestors of the present-day members of the Wolastoqiyik Wahsipekuk First Nation who, despite numerous efforts to develop agricultural production, had to face many difficulties: fires, famine, epidemics, poverty, as well as encroachment on their land and theft of wood by neighbouring settlers who, in addition to coveting the land, were intolerant of the presence of indigenous people near them.

In 1869, after a series of dubious manoeuvres orchestrated by the Langevin brothers who occupied strategic positions in both the clergy and the government, in collusion with Lower St. Lawrence notables, the land was taken over by the Crown and quickly sold at auction in the spring of 1870, thus depriving the band members of their only gathering place and main means of subsistence.

After two unsuccessful attempts to relocate to other reserve lands, one in 1876 (Kataskomiq-Whitworth) and the other in 1891 (Cacouna), the former occupants of the Viger reserve gradually dispersed in search of a livelihood.

It was in 1987 that a small group of people initiated work to find the descendants of the “Amaliseets of Viger” in order to re-form the band, revive it and have it officially recognized. After a few years of hard work, the Quebec National Assembly passed a motion in 1989 officially recognizing the Maliseet of Viger First Nation as the eleventh First Nation in Quebec.

Since that time, the road travelled is impressive. The nation has embarked on the long road of cultural and identity reappropriation while deploying considerable means to develop itself on the political and socio-economic levels.

It is in this spirit of self-determination that the community has chosen to revert to its original name, rather than continuing to bear the name given to it by the colonial authorities. Since 2019, the members of the Wolastoqiyik Wahsipekuk First Nation have thus officially reclaimed their self-determined identity, which echoes the location of our community, which has frequented the shores of the St. Lawrence River for millennia.

The beautiful and bountiful river

The people of the beautiful and bountiful river

Adjective referring to the wolastoq (a wolastoqey canoe)

The large body of water on the other side (of the mountains) - Relating to the St. Lawrence River 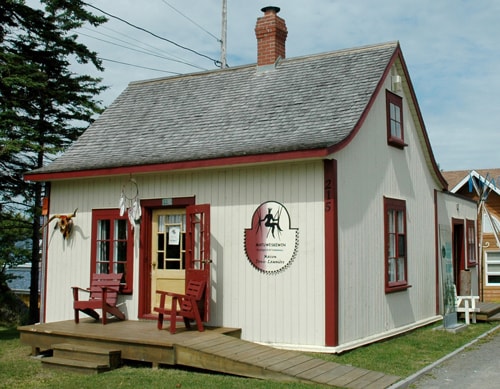 In 1891, the Government of Canada allocated a small territory sixty feet wide (18.20m) to the Wolastoqiyik Wahsipekuk First Nation (Reserve 22) in the parish of Saint-Georges de Cacouna. It was the permanent presence of a group of Wolastoqiyik in the area that led the Department of Indian Affairs to acquire the reserve. At that time, six small houses were built, including the current "Denis-Launière" house. The Denis, Brière and Launière families lived on the reserve.

The Denis-Launière House still stands at the intersection of Rue du Quai and Rue de la Grève. The front part is occupied by an interpretation center and the back part with a shed roof by the handicraft store "Matuweskewin", which means porcupine hunters in the Wolastoqey/Passamaquoddy language. As such, the name Cacouna could be of Innu origin "Kaku" or of Cree origin "Kakwa" which means in both cases "porcupines". The toponymic origin of Cacouna is still controversial.

This small house was occupied by the chief "Joseph Launière" until his death in 1972. No one has lived in the house since then.

Its interior layout has not changed over time, demonstrating the "comfort" that a family with four children could enjoy. Renovated around 2001, the house was elevated to the status of a heritage building around 2013, so it has faithfully preserved its appearance of the era. The Wolastoqiyik Wahsipekuk First Nation is the first indigenous community to take advantage of the right to give legal status to a heritage property. This building can therefore be honourably defined as a symbol of the Wolatoqiyik Wahsipekuk residence in Cacouna.